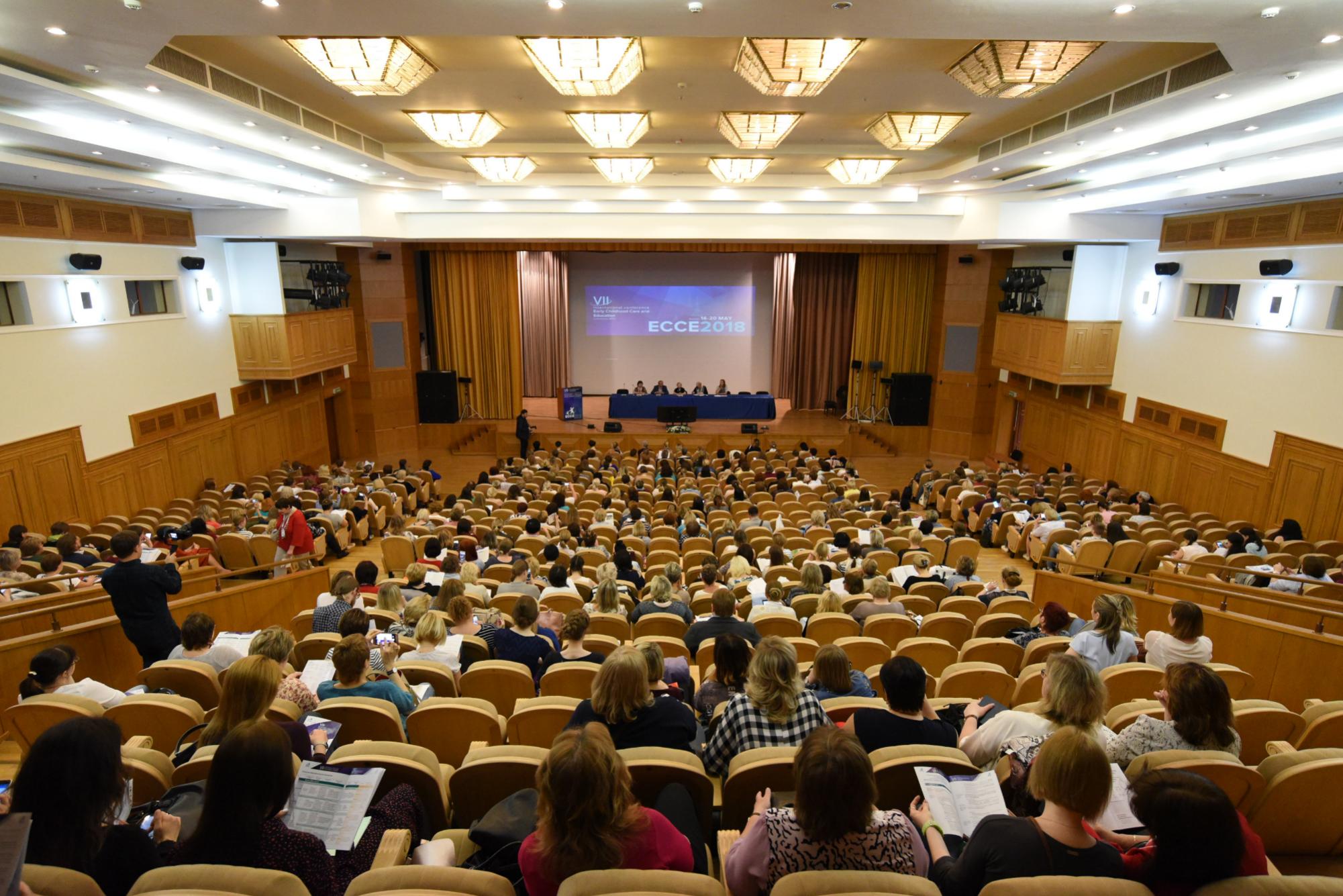 Early childhood care and education issues were discussed within the framework of the scientific program of the Conference with the involvement of a wide range of experts from Russia and abroad.

Preschool education experts from 40 countries gathered in Lomonosov Moscow State University to share experiences, best practices and recent research results in the field of early childhood. The Partner-Countries of the Conference 2018 were South Africa and Indonesia.

The Conference was held under the patronage of UNESCO for the first time in 2018, as it contributes to the achievement of UNESCO’s sustainable development goals (SDG 4.2). ECCE program includes plenary sessions, scientific sessions, poster session, panel and round table discussions. Plenary and scientific sessions are provided with simultaneous interpreting, which certainly enables to establish a constructive dialogue between all the participants of the educational process: scientists, educators, psychologists, representatives of international organizations, parental communities.

The three-day conference held May 16th-19th featured discussions on a range of topics related to the topic of early childhood care and education. The childcare tour and pre-conference round table on sustainable development were organized for the Conference participants at pre-conference day on 16 May.

On 17 May, the Executive Secretary of the Russian Commission for UNESCO, Grigory Ordzhonikidze, addressed the participants with a welcoming speech, describing the event as "a brilliant platform for the exchange of best practices contributing significantly to the achievement of the Sustainable Development Goal 4.2, designed to ensure that by 2030 all girls and boys have access to quality early childhood development, care and pre-primary education".

One of the most anticipated guests of ECCE-2018 was Dr. Yoshi Kaga, a famous expert, curator of UNESCO's projects in the field of education and training of children, an expert on inclusive education and gender equality. Special attention at the plenary session was paid to the reports of the President of the International Union of Psychological Science (IUPsyS) Saths Cooper (South Africa) and the head of the Indonesian Psychological Society Seger Handoyo. "A child is the center of the future," said S. Cooper. "Children have the right not only to satisfy their basic nutritional needs, to obtain a name, and to maintain their health, but also to the purity of messages that we adults, unwittingly, send them through the media daily - wars, violence and murders. It is in our interest to ensure the safety of our common future."

An agreement on cooperation between the International Academy of Preschool Education, Moscow (IAPE) and the Department of Global Processes under UNESCO was also signed. An international working group will begin research on the impact of electronic devices on preschool children already in 2018. The working group will include scientists from Russian universities and the University of Gothenburg (Sweden).

In an interview with the Russian federal channel Russia-24, the director of the ECCE International Conference, Mikhail Elkin, described what UNESCO's patronage means for the event. "The patronage of UNESCO gives a very high international status, recognition of preschool education is strategically important. For the preschool educators such recognition is a powerful engine, an opportunity to show initiative and raise the status of a teacher; also media provided by UNESCO: the society sees this recognition and strategic changes take place at all levels: in professional groups, in the state, in the whole society. "

ECCE 2018 scientific program included 25 topics. The most important of them were:

• panel discussion “The global future of early education in the era of digitalization” at which Irina Komarova, the leading Russian expert on digitalization, delivered a keynote speech. "The society has already entered the digital era. Technology is no longer a choice, but a reality. The future of generations depends on what kind of technology we choose for education," - summed up the participants.

• round table discussion «Vygotsky's Cultural-Historical Theory in the Context of Preschool Education», chaired by Rector of IAPE, Chairman of the International Committee of the ECCE Conference Prof. Nikolay Veraksa (Russia).

One of the world's leading experts on cognitive development of children Professor of the University of Gothenburg, Director of the Center for Studies of Learning, Interaction and Mediated Communication in Modern Society Roger Säljö (Sweden) and President of the International Psychological Union, President of the Pan-African Psychology Union, Professor Sasasiven Cooper (South Africa) took part in the discussion. Mr. Cooper said that the time context, in comparison with Lev Vygotsky’s one, has changed, moving to the era of information and communication technologies (ICT). He described modern conditions as a constant struggle between individualism and collaborationism and noted that current scientists have more chances to come to an agreement on many important aspects of preschool education than in 1920s and 1930s in Russia. Experts considered the need to reorient the digital resources in such a way that they could compensate for the curtailing of active and role games in the life of preschoolers.

•   another roundtable discussion was dedicated to the investments and efficiency in preschool education and early childhood development. The moderator of the discussion was the head of educational projects of the Russian office of the World Bank Tigran Shmis. He noted that in many countries of the world children do not reach the educational level that could give them their potential in preschool and secondary education. In many countries the issue of timely preparation of children for school remains not fully resolved. "The level of administrative management of educational organizations lags behind the average level of economic management in these countries," Mr. Shmis said. And this is typical not only for Russia, but for many other states. Mr. Shmis described the creation of a new level of education of pedagogical and administrative personnel for educational institutions as a way to overcome the education crisis. The same idea was expressed in the presentation of the program specialist of UNESCO on inclusive education and gender equality Dr. Yoshi Kaga (Japan). "It is extremely important to train qualified personnel for preschool education. In many countries, - said Dr. Yoshi Kaga, - the working day of a kindergarten teacher is the longest one. And the salary is often lower than that of teachers in primary and secondary schools."

The Organizing Committee has already started the preparation for the ECCE Conference 2019. The exact dates will be published very soon on the Conference’ official web-site.

Registration for the conference